NINTH VERSION
By Fred McDonald
Hahira ---Dec. 27, 1961 Finding an origin of the name "Hahira" is child's play.  The real problem is weeding out the right one.
No less than nine different stories have been related as the gospel truth for the beginning of the name.
The most recent explanation, however has an air of authenticity and ties in well enough with other versions to make the place-name student take a second look.
In its Dec. 21 edition the Hahira Gold Leaf cited excerpts from a letter written by Benjamin Allen Folsom of Daytona Beach, Fla., grandson of Randall Folsom, one of the first settlers of the present Hahira area.
Here's the gist of the letter:
Randall Folsom owned a plantation about five miles west of Hahira which was often frequented by the "landed gentry" as well as many travelers crossing South Georgia.  Among these visitors was an Englishman who delighted in telling stories of his hunting expeditions.
One of the Englishman's tales concerned a trip into northern Africa on which "his group came to a small native village, near a spring of fresh water and the village was called Hairaairee."
"So Grandfather  (Randall Folsom) took the name for his plantation."
The post office took its name, the letter continues, from the name of the plantation on which it was located, with Berry J. Folsom, the writer's uncle serving as the first postmaster.
The story checks out in some details:  A Folsom family did own a large tract in the area and the "History of Lowndes County," compiled by the General James Jackson Chapter of the Daughters of the American Revolution, does give credit for the name to Berry J. Folsom a man named by a postal record in the National Archives as the first Hahira postmaster.
With other versions of the name's source to lead one to suspect that the other stories are corrupted forms admittedly, some of the same story.
For example through four other accounts of how Hahira got its name run some of the same threads; Africa, the Folsom's and an Englishman.
1. Most closely resembling the latest story is an account by J.E. Massey, Hahira Druggist, which he said he recalled only fuzzily:
Berry J. Folsom, "an eccentric bachelor who loved to read," had a book containing a story about a trip into Africa. Someone, according to this explanation was making a trip into Africa by riverboat and recorded adventures at each of the stops including a village named Hahira.  The book impressed Berry Folsom so much the story goes, that he decided to use the name "Hahira" for the new post office.
2. Another version, uncovered by Dr. John H. Goff, Georgia place-name authority and former Emory professor of Atlanta, is that the town was named for a river either in Liberia or Pakistan -- another African slant.  Very similar is the one found in the "History of Lowndes County."  Berry J. Folsom "gave it the name of Hahira from the name of a river in Liberia."
3. A Negro woman -- again the African thread -- is given the credit for the name in another legend.  Given the privilege of naming the village, she was so astonished that her answer when asked for a name was simply a squeal of astonishment that resembled more closely than anything else, "hay hi rah".
4. Still another theory found by Goff was that Hahira was the name of a mythical place perhaps mentioned by Tennyson in one of his poems -- an echo of the "Englishman" note sounded in the letter.
Not related at all to the explanation in Folsom's letter are four other possibilities, the most likely of the four credits the name to an Indian heritage.  On first consideration the idea seems plausible. However, Goff who has done an extensive study of the name said that and Indian background for the name can be almost certainly be discounted.  He reported that a correspondent student of Indian languages checked all available word list of Indian tribes in the Georgia-Alabama-Florida territory and found nothing that even remotely resembled "Hahira."
Carroll Scruggs recently reported another of the theories which gives the name a Biblical Background.  Scruggs, who favors the Folsom account said that someone asserted that the name was a corruption of Hahiroth, an abbreviation of Pi-Hahiroth.  Scruggs stated that Pi-Hahiroth, according to the "Columbia Encyclopedia" was a resting place for the Israelites on their exodus.  Scruggs seriously doubted the authenticity of this version of the source of "Hahira."
Some Hahirans, according to Marie G. Crockett, vaguely give credit for the name to a spinster aunt of one of the pioneers.
The fourth tale not related to the Folsom account is a classic given by a Hahira old timer but seems too pat to merit more than passing appreciation for its folksy humor:
A man named Hira owned a store near the railroad track through the village, and as the train rolled by, one of the men on the train would yell to the storekeeper, "Hey, Hira!"
Eventually, the story goes, the greeting came to be used as the name of the village.
And so the evidence piles up.  Discounting the "Hey Hira!" story and the one about the spinster aunt and giving only reserved consideration to the Indian and Biblical theories, the explanation given in Benjamin Allen Folsom's letter gains weight in the light of its factual accuracies and its resemblance to other accounts, which very feasibly could be its garbled versions.
The above was reproduced from a crumbling Valdosta Daily Times newspaper clipping contributed by David Fields, Cat Creek Road, Hahira, GA. 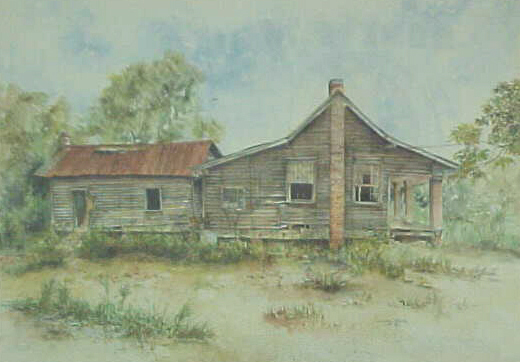 This is a painting by Hahira artist Lillian Brooks of the Berry Folsom home which according to local historians was the first Hahira post office.  The house was demolished in the early 1960s during the clearing of the right-of-way for construction of I-75.  It was located on the Old Union Road near the intersection of the Old Barney Road, a few hundred yards north of I-75 and GA Highway 122 Exit 29, approximately where the Hahira Nursery is located today.